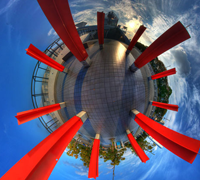 Planetoid photography turns panoramic images into beguiling spherical scenes, pictures that at first glance appear to be tiny planets floating in space. A simple planetoid can be constructed from a landscape photograph, transformed with some fairly simple steps in Photoshop, adjusting image dimensions and using the Polar Coordinates filter.

Planetoid photography turns panoramic images into beguiling spherical scenes, pictures that at first glance appear to be tiny planets floating in space. A simple planetoid can be constructed from a landscape photograph, transformed with some fairly simple steps in Photoshop, adjusting image dimensions and using the Polar Coordinates filter.

The planetoids in this post take the process much further. Generally, a 360-degree panoramic image is created from a number of photos stitched and blended together, resulting in an image that presents everything visible from a single viewpoint in space. Panoramic stitching software such as PTGui may be used for this process. The image is then stereographically projected into a spherical form. This process produces the awesome artworks listed below, astonishing images made from everyday scenes. There are many tutorials available on the Internet explaining how you can begin building your own universe of planetoid photographs. 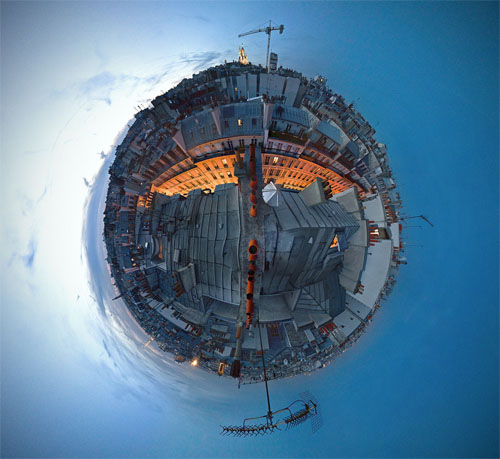 Boltron is a prolific planetoid producer, making many beautiful cityscape spheres. This image is constructed from 32 photographs of Parisian rooftops near the Sacr√©-C≈ìur Basilica. The atmospheric orange and blue lighting is complimented by compositional touches including the crane and television aerials at the planetoid‚Äôs poles. 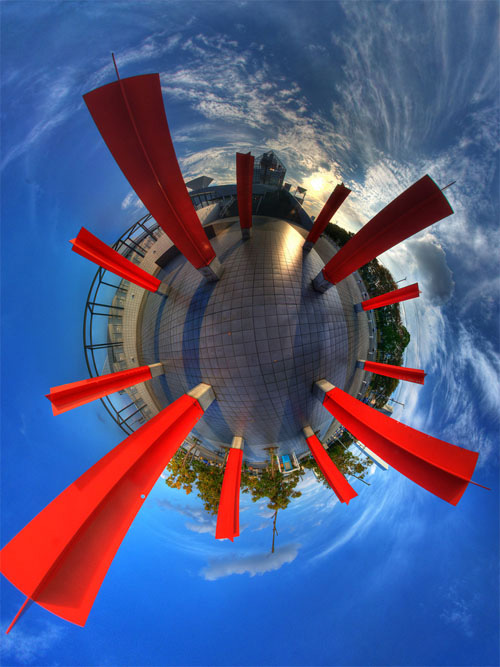 This striking image is a stereographic projected version of an original panoramic composite photograph, which was captured through a fisheye lens.

The dynamism of the rollercoaster and tunnelling cloud formations offer a sense of vertigo to this composite image. 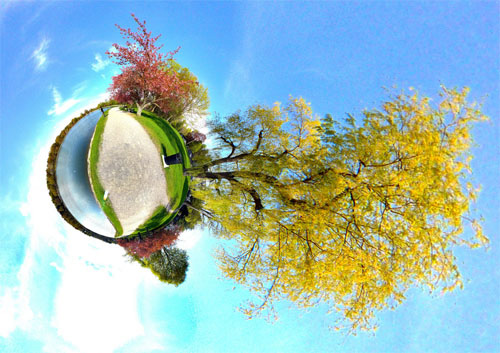 This charmingly colourful planetoid is composed of photographs of a reservoir in Brookline, Massachusetts in USA. 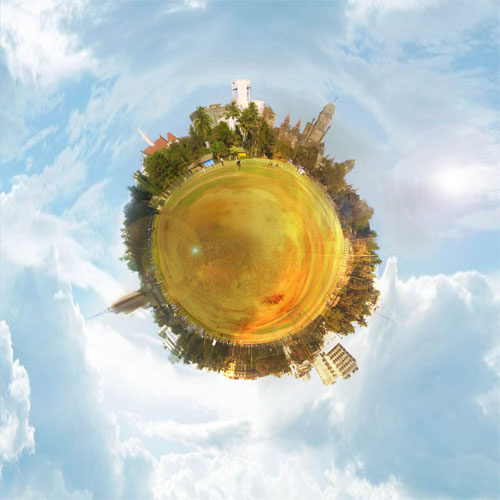 The panorama that makes up this planetoid was shot at Azad Maidan in southern Mumbai, and shows the city‚Äôs characteristic skyline and scorched midsummer hues. 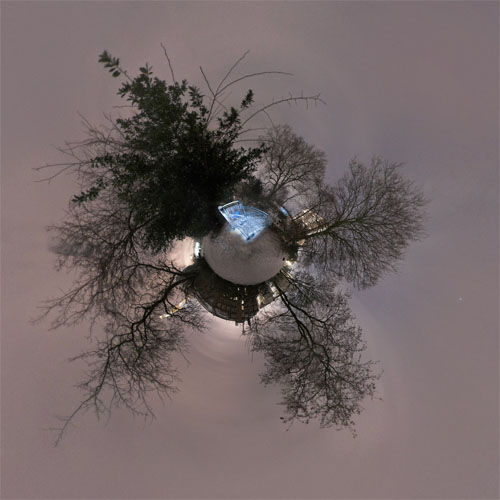 The centrepiece of this slightly eerie planetoid is a glowing shopping trolley. 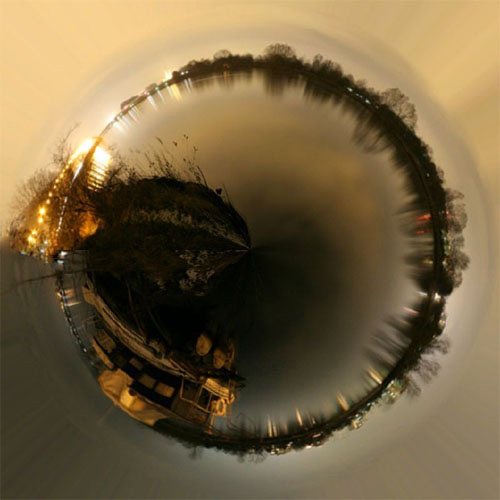 The serenely coloured waters of the River Danube create a mercurial metallic effect when transformed into this planetoid. 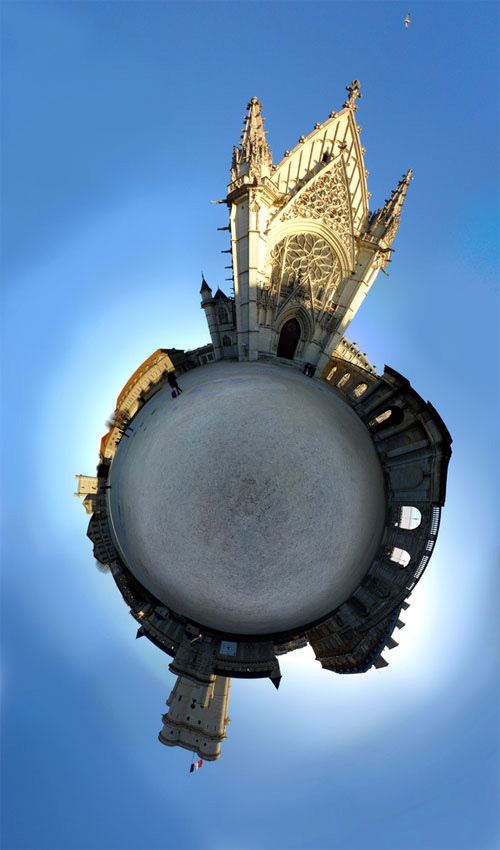 This planetoid is composed from a panorama, which itself was constructed from 43 individual photographs. The buildings on the planet‚Äôs horizon are the medieval castle and church at Vincennes in eastern Paris. 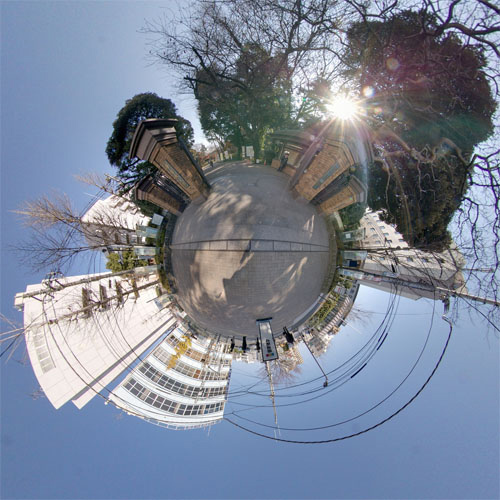 This planetoid of Gakushuin Unversity, Mejiro, Tokyo, is constructed from a handheld panorama shot on a Pentax with fisheye lens, stitched and toned with Hugin imaging software. 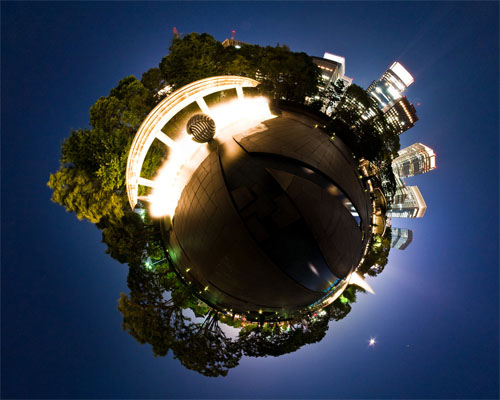 The lights and evening sky in this stereographically projected image create a distinctly spacey atmosphere. 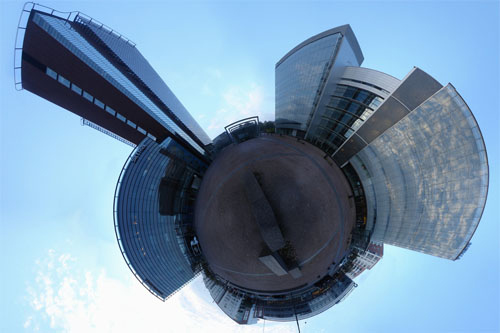 This planetoid, with its pleasingly distorted glass buildings, is made from a handheld panorama using 81 pictures. 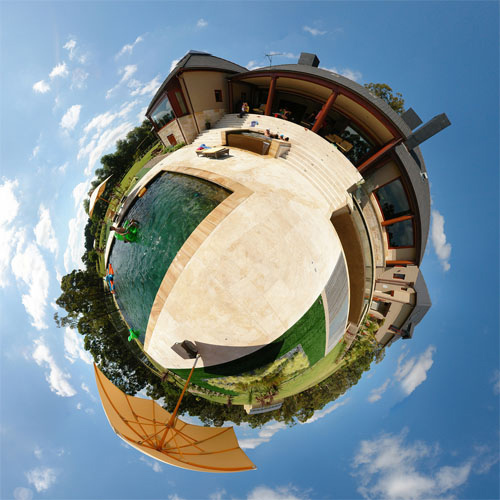 The sunny poolside scene on this planetoid is the setting for the photographer‚Äôs family Christmas celebrations. 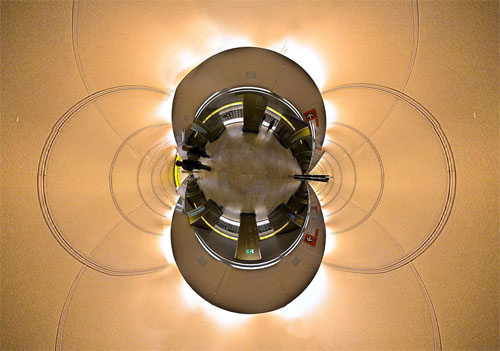 A panorama taken in a Prague Metro station forms the basis for this unusual planetoid, with its intersecting circles and eclipse lighting effects. 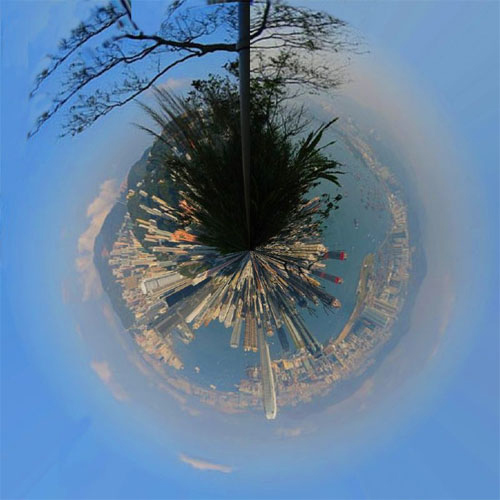 The hazy horizon and bristling skyscrapers in this image are from an elevated panorama of Hong Kong. 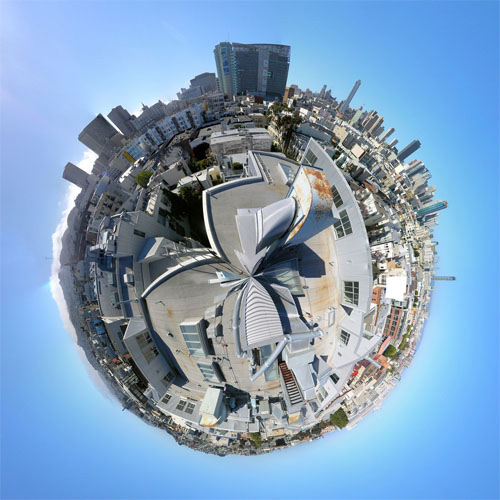 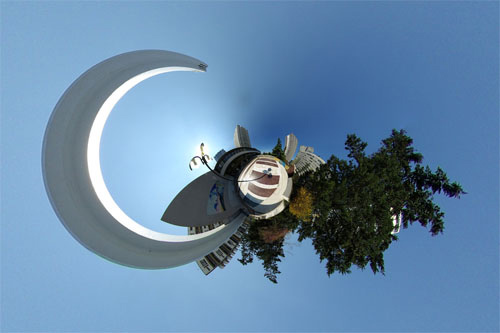 The photographer has had plenty of fun with this planetoid, hugely distorting a chimney that stands above a Turkish plaza to create the balance in the stereographic projection. 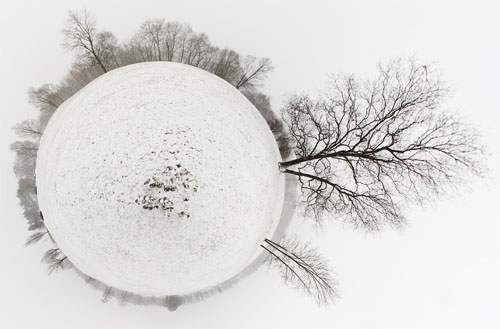 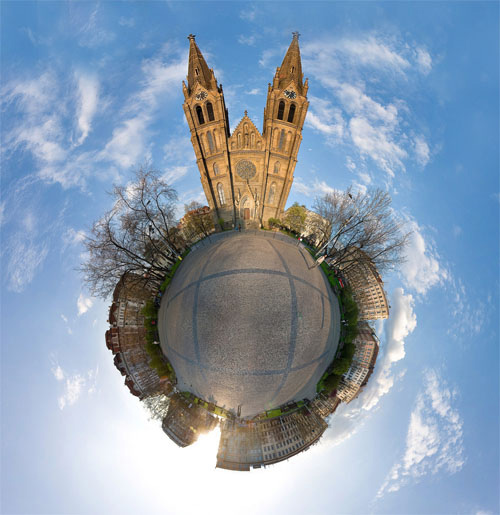 Prague‚Äôs St Ludmilla Church tops this planet, which is formed from 24 individual pictures. The photographer merged the image with PTGui, imaging software for stitching photographs into a 360-degree panoramic image. 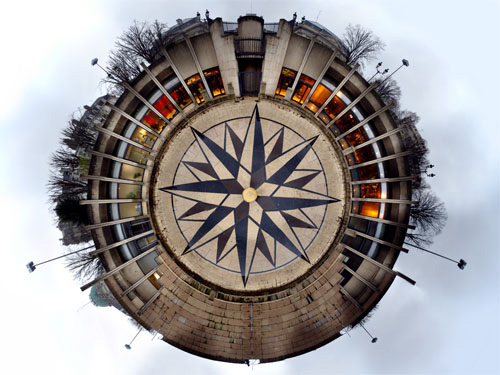 This image, made from a 56-photograph handheld panorama, uses the floor decoration in Lille‚Äôs Place de la R√©publique to form the compass point design at the centre of the planetoid. 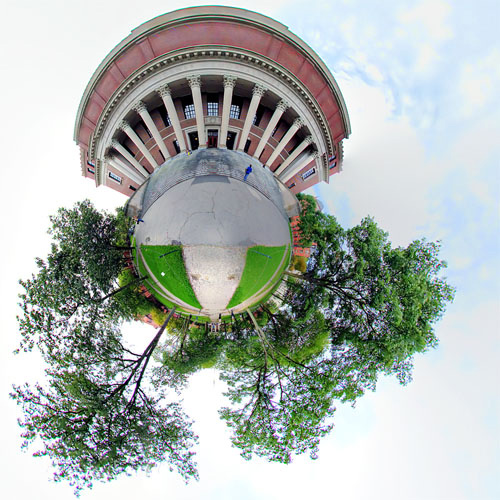 This planetoid enjoys the contrast of a neo-classical portico to the north, with verdant lawns and trees in the southern hemisphere. 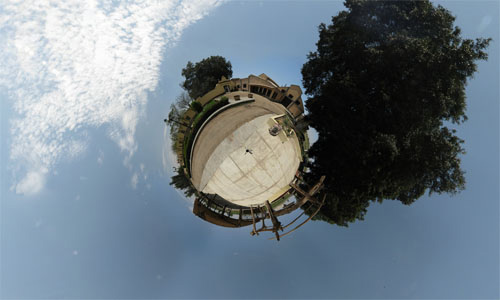 This stereographic projection originates from a spherical panorama taken at Vista Alegre vineyard in Peru. Assembled from 78 images, the composition is neatly balanced with the dark mass of trees setting off the white fluff of cloud to the left. 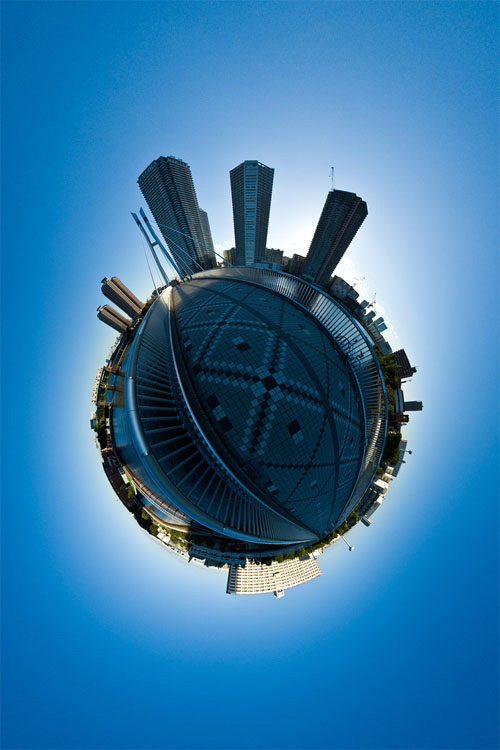 The patterned surface of the footbridge at the centre of this image emphasizes the planetoid‚Äôs spherical shape along with its sedate city skyline.

If this post has peaked your interest and you want to give planetoid photography a try, here are a few links to tutorials that will get you started:

What do you think about these photos? Please share your thoughts in the comments below. Thanks!

Want More? Subscribe and We'll Deliver it to You.

Tom Walker is a writer and designer who works for a UK based supplier of toner cartridges. He's also partial to shiny new gadgets and apps.
Visit Author's Website  |  All Articles From This Author